Works in progress from a midnight painting sessions this weekend. The weather was beautiful, but I hope these wild fires calm down soon. I can’t believe how many homes have been lost over the last few days…

A few watercolors from a series I finished some time ago.Â More here.

Boy, what a tough week. People are being let go and our department is getting smaller.

I had fun making the first Valentine’s heart, and kept at it. These are inspired by some of the prints that caught my eye while browsing style.com. Most are from previous seasons (Too hard keeping up with everything!) I’ll probably send some late V-day cards.

We must love one another or die.

What drives Gregory Thielker and Alexandra Pacula? Their styles of oil painting are shaped by photography and filtered through car windows. Both pay homage to an instrument praised for transparently rendering realityâ€”yet their paintings withhold the straightforward picture you would expect. They like to place obstacles between the observer and observed. Thielker chooses rain, bringing photorealistic detail to drenched windshields, an everyday scenario where unmediated vision might actually save your life. Pacula, by contrast, chooses a style of blurring that mimics the woozy smears of long-exposed film. These artists tilt representation toward abstraction, one extracting vitality from stillness and silence, the other turning the commotion of real life into the repose of pure color.

Gregory Thielker shows us a world lighted less by the sun than by the red glare of brake lights and traffic lights. It’s an overcast, halted place. Here everythingâ€”which is to say, nothingâ€”seems to occur under rain clouds or the cover of nightfall. If we’re not waiting on the road, we’re in parking lots. This inert realm outside the vehicle is refracted through patterns of rainwater: waxy droplets, lattices, and sheets of rippling liquid. Thielker’s lyrically fractured vision lends a sense of mystery and activity, a fugitive spark of life, to the quiet routine of a country locked in its own cars.

Alexandra Pacula gazes outward from a quintessentially New York point of view: a taxicab window. She presents a sunless setting, too, though in her images we find more headlights, neon signage, and peeks into brightly lit interiors. Lights, in other words, that approach us and invite us in. Little can be seen clearly because the passage of time blurs and bends the scenes like memories. Clarity doesn’t attract Pacula. She prefers the delights of the deceiving mindâ€”and camera. Watching the glow of storefronts and passing cars and street lamps melt into twitchy trails of color, after all, one thinks of long-exposure photographs and their disloyalty to reality. Her paintings likewise rebel. They side against the frenzy and fluorescent vertigo of the city at night, rebuilding blandly busy moments as absolute visual spaces into which the beholder can escape.

With the help of a broken dining chair seat that I’m using as a portable workstation (thanks, Ikea), I’ve been finding a little bit of time in the evening to finish a series of 15 small watercolor paintings that will hopefully form part of a larger collection of new work.

With the start of the new year, and with BJ and I more actively contemplating our future, I need to push harder to make time to pursue our creative projects. We really can’t foresee what next year will bring, although our plans continue to multiplyâ€”and sometimes, as intimidating as it is to get your work shown or to sell your work, there’s no reason to keep postponing our own work. And if we fail, we just try again, and fail better.

This year, I wanted to set aside some time to make homemade gifts. I did a few pencil sketches and watercolor washes on my bristol pad, cut them to size, and placed them in Ikea frames. My sisters received these…

I don’t remember exactly how I came to appreciate art. But I do know that I didn’t begin with Ab Ex cowboys like Pollock and De Kooning, much as I came to love them later on. I began, I’m nearly sure, with the more or less famous works of the all-American painters: Hopper, Homer, and Wyeth. That meant Hopper’s Nighthawks, Homer’s Gulf Stream, and, of course, Wyeth’s Christina’s World. They all communicated different varieties of a loneliness that seemed essentially American: Hopper’s metropolitan anonymity, Homer’s man-against-the-elements tussle, and Wyeth’s solitude of the iron will. In the words of D.H. Lawrence: “The essential American soul is hard, isolate, stoic, and a killer. It has never yet melted.” These paintings couldn’t melt. Each one had an air of melancholy that spoke to my own melancholy. 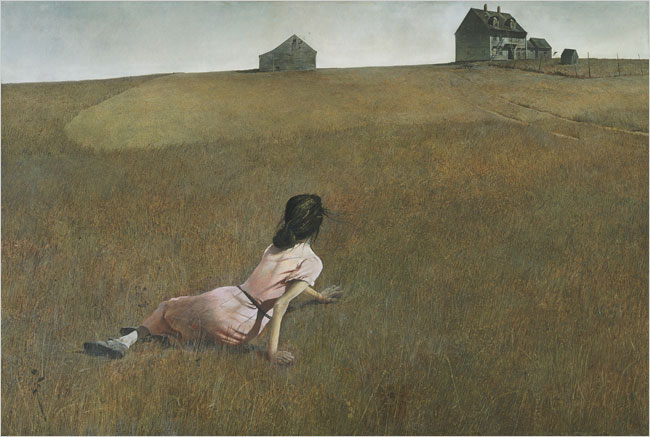 Christina’s World struck me as a triumph of craft. The grey-gold hue of the field came close to the appearance of bruised flesh. Amber waves of grain, these were not. No, this work of art is far from a testament to nature’s beauty and bounty. Christina’s twisted posture alone seemed patently unnatural, curving toward the house, as the road curved away. From the looks of it, she had no use for roads and paths. Thoreau might as well have been talking about her:

I wanted to live deep and suck out all the marrow of life, to live so sturdily and Spartan-like as to put to rout all that was not life, to cut a broad swath and shave close, to drive life into a corner, and reduce it to its lowest terms, and, if it proved to be mean, why then to get the whole and genuine meanness of it, and publish its meanness to the world; or if it were sublime, to know it by experience, and be able to give a true account of itâ€¦

Christina had no say: she was born to the mean minimal life of the country cripple. But she would hardly accept a limited existence, imprisoned in her own quarters, in a chair, cut off from that windy land and the big-sky landscape. She’d wrest liberty back. She would cut that broad swathâ€”as she did very literally in Wyeth’s bone-dry grass, having wandered so far afield that her house fades into a cloudy silhouette against the horizon. The background is dark for a reason: like everything else, the Depression turned it into a gloomy husk of its original form. The background is also small for a reason. Wyeth’s composition thrusts Christina so far into the foreground that she dwarfs the that faraway house, comparing the largeness of her will to the smallness of anything that might confine it. Or define it.

“Formulaic stuff not very effective even as illustrational ‘realism,'” is how Peter Schjeldahl wrote this off. Art critics at the time were brandishing arms and theories in defense of Modernism. This was the time of Pollock and here was Wyeth, the consummate realist sticking to his guns, while the world was seduced by abstraction. It’s no surprise that illustrators today stand by him. His style seemed to gracefully encompass both a gestural wildness and painstaking detail, a sense of hope alongside misanthropy. He illustrated one thing to perfection: how an artist can brave the bandwagon mentality of the art world, without giving up a single facet of his singular vision. The water tower painting is actually twice the length of how it is pictured on here, but i couldn’t fit it in the scanner. i think the white space would of made a difference.

i think i confused my shampoo with conditioner and conditioned twice. argh.

The cone paintings slowly are coming along, but I decided to take a break and do something fun for a friend. Narwhal vs. unicorn, who would win?